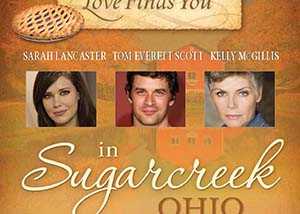 Our grandbaby chose to ignore her delivery date after all, and so our family continues to wait with bated breath for this precious little girl to arrive. My son and daughter-in-law have wisely chosen not to share her name with anyone until she gets here (we are an opinionated bunch, and they are worried there will never be a consensus) and so we continue to call her “Twinkle-Toes” the nickname my husband gave her after seeing an ultra-sound where she was wiggling her little feet.

In Sugarcreek, the bank robbery scene is being filmed. One of the local banks has been kind enough to allow the crew to film there. It is interesting to me that the last scene filmed will be the first one movie-goers will see. As a writer, I have the luxury of describing in as many words as I need, a characters’ back story and thoughts. But the director and actors must “show” everything. An emotion I can describe in depth, must be shown, in milliseconds, on an actor’s face. My heroine Rachel’s back story–the day her daddy gets shot and she stops being a little girl–has to be shown, not told.

It is to be a relatively short day because it is the last. I’m assuming things will go smoothly. When I left yesterday, they were actually ahead of schedule–which is pretty unheard of in the movie industry.

Today, although it is good to be home, I’m missing the new friends I made on the set, and also thinking back on the things I have learned.

Prejudice often lurks in the strangest cracks and crannies of our minds. I’m beginning to think that it can take a lifetime to root it all out. If you had asked me a month ago if I was a prejudiced person, I would have laughed at the thought. I have no problem with different cultures or skin colors. This world is one of fascinating diversity to me. I did not think I had any prejudice about professions, either. In my opinion, the sweet woman who cleaned my hotel room is as worthy of respect as the attorney I met on set. Both work hard at their jobs. .

I did, however, have one prejudice of which I was unaware–it was about the people who make our movies. When I decided to spend time on the set, I assumed I would be spending time with at least a few spoiled, overpaid Hollywood-types. I expected to see enlarged egos and watch at least a couple hissy fits.

What I saw was not what I expected.

Instead of seeing an actor with an over-sized ego, I saw Tom Evert Scott jump up to help a local waitress who was overloaded to the point of dropping a tray. I experienced Tom taking the time to kindly encourage me as I struggled through my small cameo role. Sweet Sarah Lancaster, took the time to comfort and hug me when I broke down in tears at the beauty of her scene at the lake. I will forever carry the image of Kelly McGillis patiently sitting on a box in the hot sun, repeatedly getting up to say her lines over and over whenever they needed her. Such humble professionalism in spite of being a movie icon. I’ll always remember the skilled wardrobe ladies doing laundry and alterations late into the night after everyone else had gone to bed. I’ll always remember watching a very young, but extremely competent and focused crew working twelve and fourteen-hour shifts day after day.

In between scenes I had time to talk with many of the people involved in the making of this movie and I heard life stories that made me practically gasp with the pain of what some of them had endured. It didn’t take long to realize that we were one bruised and battered group of people who were coming together to create a cinematic gift for other people to enjoy.

The director, Terry Cunningham, told me yesterday that one of his favorite moments of being in this business is sitting in a crowded theater, watching and listening to people enjoy a movie he directed. “That’s the best feeling, Serena,” he said, wistfully. “That is the absolute best feeling!”

A few minutes later, I was talking to Stephen Campanello, production manager, as he congratulated me on having written a good book for them to work with. In response, I quoted another romance writer. “I’m not trying to change the world,” I said. “I’m just trying to brighten someone’s weekend.”

“But maybe…” Stephen said. “Maybe it is possible to change the world by brightening enough people’s weekends.”

Mission Pictures International, which is producing this movie, is a relatively new production company trying to make a difference by creating family-friendly movies with strong moral values.They are not alone. There are others.

The Uplift cable channel, on which this movie will first air, has over 65 million viewers, and is adding more every day. I had the pleasure of spending a few hours with one of the Uplift executives from L.A. who came to visit our set. She spoke passionately with me about her vision for creating a television station that will continually “uplift” our culture instead of tearing it down.

We Christians are awfully quick to criticize Hollywood. Sometimes that criticism is justified. But after what I’ve seen these past couple of weeks, I can’t help but wonder if it might not be wise to remember to throw a little praise their way when they get it right.

As for me….from this point on, I will be offering some heartfelt prayer for those brave souls who are trying to change the world by brightening someone’s weekend….one good movie at a time.