The Filming of Hallmark’s Moriah’s Lighthouse! An Author’s Journey (Part 5)

We try to leave the Airbnb as clean as we found it. Then we drag the luggage out, turn out the lights, lock the door, deposit the key in the mailbox, and pull down the metal door shutter like our hostess asked. We see no more of our hostess than our initial visit. But as much as I am enjoying Dinan and the fact that I really AM in FRANCE, I still have a slightly sick feeling about arriving on set. Here’s why:

Authors do not usually spend time on the set of a movie. This is partially because the director and producers would prefer not to have to deal with the chance of someone feeling like they have the right to second-guess the plot, argue over changes from their book, and basically be underfoot. I get it.

The director and producers have an enormous amount of work to accomplish in an incredibly short amount of time. Made-for-TV movies are often filmed in exactly three weeks. Scenes are planned out of chronological order to maximize locations, costumes, and most importantly…time!

As we drive away, I check my email and am delighted to see that Borga Dorter, one of the producers on site, has sent an email welcoming me to France and is offering to meet me at eleven o’clock a.m. at the Castel Beau in Ploumanac’h where filming has already begun.

After arriving in Ploumanac’h, we check in with our new Airbnb hostess, using Google Translate. The house is spotless. I’m excited because it has a lovely sunroom, where I intend to write my next few days of blogs. 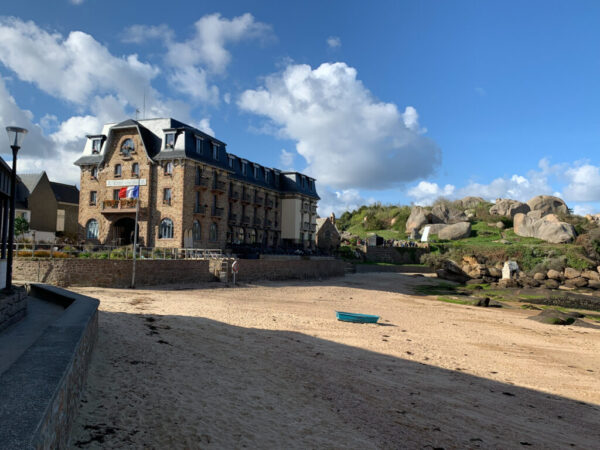 Then we go looking for Castel Beau, spot it, and go scouting for breakfast. We find a coffee house where I content myself with coffee, a croissant, and some excellent strawberry jam and feel very European. 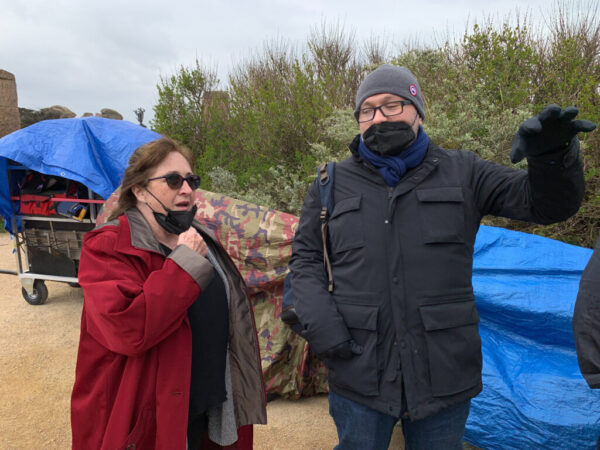 We soon meet with Borga Dorter, a very thoughtful and kind-acting man. After introductions, we get into our cars and he leads us to the lighthouse. The location is stunning. I’ve never seen anything like it. Huge red granite boulders are scattered everywhere, as though tossed there by a giant hand. The original lighthouse was built in 1860 but was destroyed by the Germans during WWII. This newer lighthouse was rebuilt in 1946. 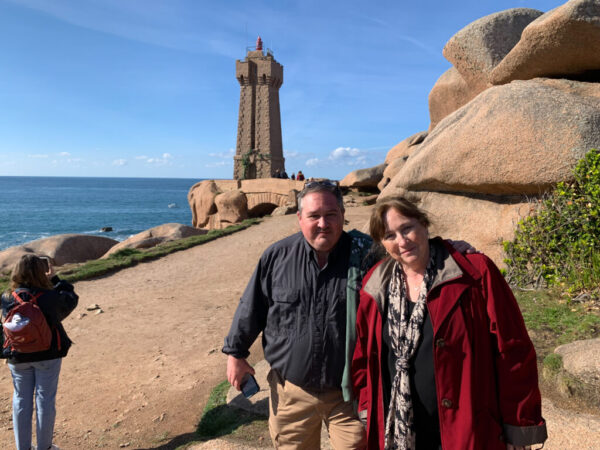 (The star of the movie: the Lighthouse! 😊)

Borga takes us inside the lightkeeper’s house where he leads us into the living room and introduces me to some of the cast. I meet Rachelle Lefevre, who plays Moriah. I thank Rachelle for agreeing to be in this movie. She thanks me for “writing the book that brought us here!” 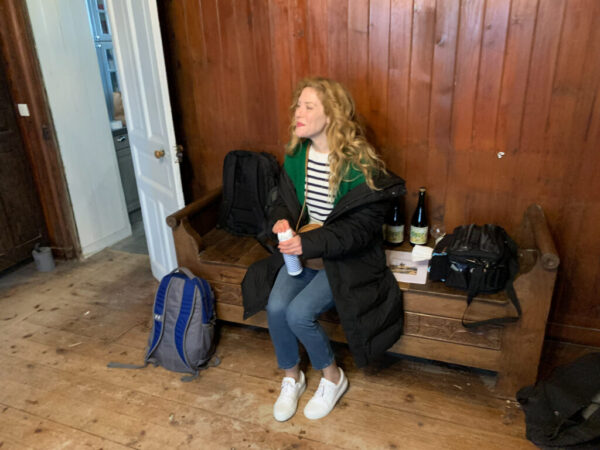 (Meeting Rachelle Lefevre, aka Moriah, for the first time!)

It’s hard to imagine her playing Victoria, the scary, feline-acting vampire on Twilight. But for our movie, she makes the switch to a wholesome French girl, and does it perfectly.

Next I meet Serge Dupire who looks much like I expected my Nicholas to look and he has a gorgeous French-accented voice. He doesn’t mention it to me, but I find out later he’s a star on a long running popular French drama called Plus belle la vie. 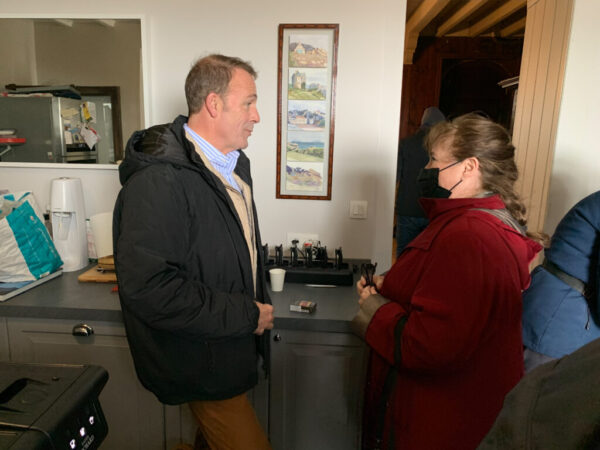 (Serge Dupire, aka Nicholas, and Serena meeting for the first time)

Luke is strong and handsome like my Ben. I find out that Luke is no stranger to carpentry and woodworking. He tells me that his grandfather was a cabinet maker and taught him. When he moved to Los Angeles, he took classes in carpentry so that he could remodel his L.A. house. 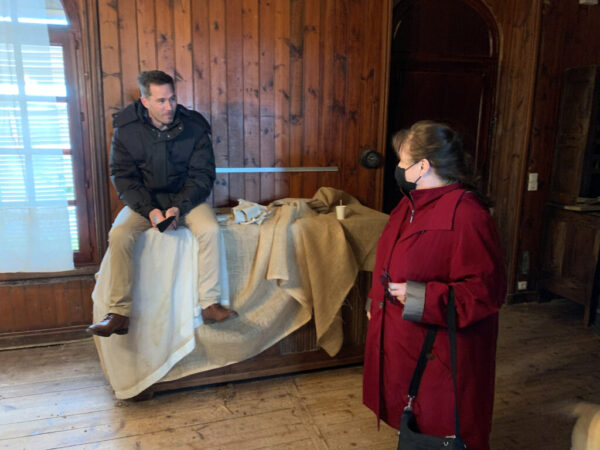 (Luke Macfarlane, aka Ben, and Serena meeting for the first time)

Borga also introduces us to the director, Stefan Scaini, who is worried about the weather. The scene they will soon be filming outside the lightkeeper’s house is supposed to be sunny and warm, but instead, it is windy and very cold. 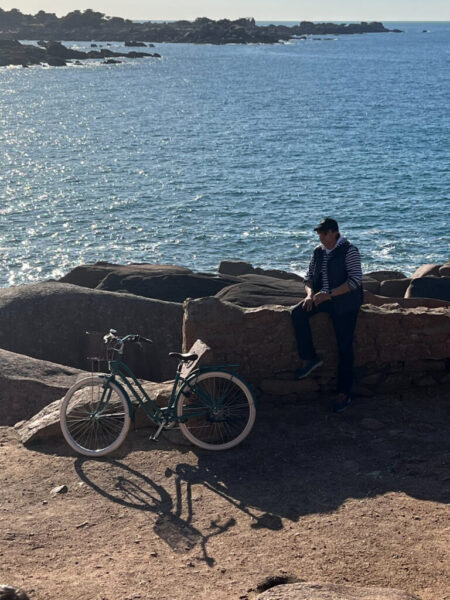 (Stefan Scaini contemplating whether it's too windy) 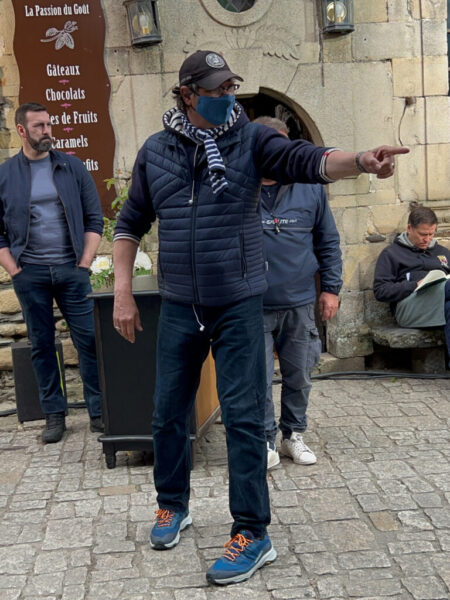 Stefan, I find out, in addition to a long list of movies and awards, was the director for two of Hallmark’s highest rated movies: Love, Romance and Chocolate, and Christmas at Castle Hart. This is exciting news to me because I know it bodes well for the quality of Moriah’s Lighthouse.

Start the Journey at the beginning!
Continue to the next part of the Journey! 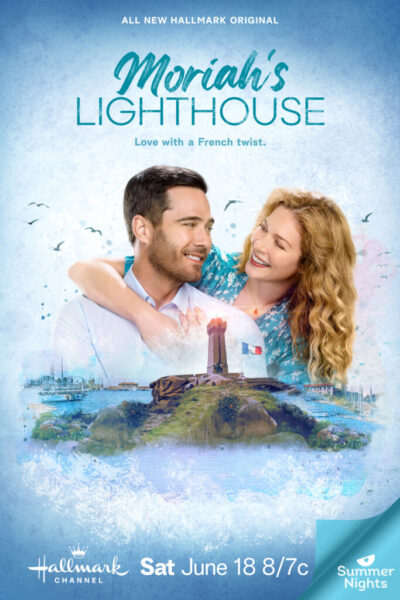