So Friday we moved the production office, base camp and set to the Garaway Athletic Fields (Baseball field) (Google Maps Link) to shoot the incredible scene from the book where Joe gives away his identity during the ball game. The day started off early with people coming in from all over the place. We had extras coming from Columbus, Cleveland, the local surrounding areas and even from Scioto county down south! We had a nice size crowd to fill the stands (to give the illusion that we were there to cheer for the teams) The weather was just amazing, and perfect for an outdoors shoot. About 90% of the day consisted of a high-in-the sky thick fog. Some people would think “How in the world could a foggy day be perfect conditions for a bright and sunny game day scene?” When the lighting crew sets up for a shot, they have to put up diffusers, to diffuse or scatter the light so that we don’t have spot/harsh/concentrated lights being cast on the actors/actresses or scenes which can create unwanted shadows. So instead of having to constantly setup diffusers and reflects to get the light where we wanted it, we were blessed with a natural full sky diffuser. Next thing on the check list, crowd placement. Once you’re placed, its imperative for you to stay locked to that spot till told otherwise. If you start moving around to different seats during the different takes/camera angles, you’ll look like those tires tracks you spot in the background when watching an old western…something just isn’t right and can sometimes distract the audience from the story and feel of the intended emotion of the scene. Now comes the waiting part… you sit when you’re told, you stand when you’re told, you cheer and shout when you’re told, and you pantomime when you’re told…which is a lot harder than you think. Trying to clap and cheer without actually making any noise is quite the challenge. So the main characters of the story come onto set and are placed directly in front of, none other than our very own Kerri D., Annie D., Simon D., Eli C., Adam C., and Kara Jo M. So when you watch the movie for the 4th, 5th, or 6th time make sure to look behind Elise, Rachel and Bobby and you’ll see our very own budding superstars! We had more friends in the stands and I’ll let you play where’s waldo when the movie comes out 🙂 On a side note I’m still not sure what my character was doing, I was wearing a Garaway Pirates shirt, but I was cheering for the Fire Fighters. Not by choice, but I think my character may have been suffering from identity issues. I think all our voices were shot and hoarse by the end of the day. I’ll post more later.

(Broad view of what the extras saw most of the day) 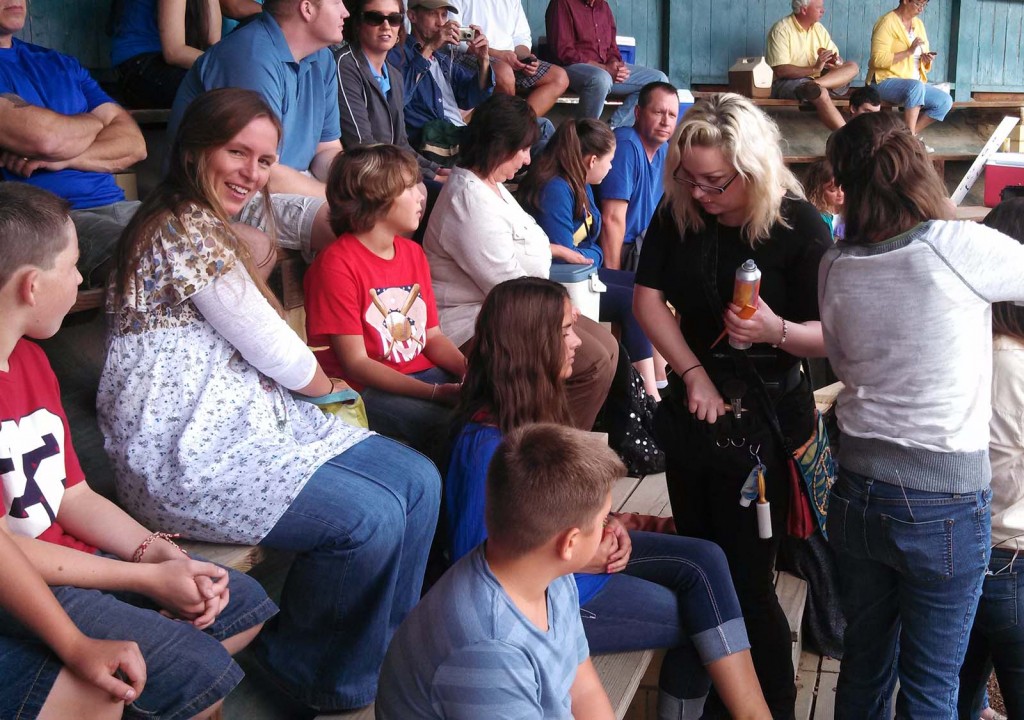 (Annie demanded hair and makeup, what a diva… 🙂 just joking, everyone had a great time and everyone was a great sport about everything!)