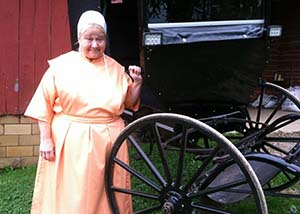 Yesterday was cold and overcast, and I had not taken a sweater, so I was chilly all day. Today, I dressed warmly–as did most of the crew–and, of course, it was broiling and sunny all day and many of us spent the day slightly miserable. The yellow jackets happily joined us and added their buzzing, nosy, presence to our party. I was chatting with the chief of police and not paying attention as I started to take a sip of coffee. Someone standing nearby stopped me and pointed out that I was about to inhale the yellow jacket that was exploring the inside of my cup.

My favorite scene today was when Chloe (Joe’s uppity agent from L.A.) verbally lashes out at Aunt Anna (who has the mental capacity of a child) and hurts Anna’s feelings. Marianna Alacchi (“Homicide: Life on the Street”) who is the actress portraying Anna, does a wonderful job portraying a mentally-challenged adult. Joe defends Anna and tells Chloe to never talk to her like that again. One of the reasons I love this scenes is because the script-writer includes a great pay-back on the part of Anna later on in the movie.

Yesterday, I met Madison Blake, who will play ten-year-old “young Rachel” in a scene later this week (the one at the bank where Rachel’s father gets shot trying to stop a bank robbery.)  Madison is absolutely adorable and looks like she could easily grow up to look just like Sarah Lancaster. Yet once again, great casting. This is her first movie and she’s all excited. Her mom is warm and outgoing and thrilled for her daughter. It was a special moment in the book store when I met her. I was busy signing books, glanced up, and there was this sweet little girl holding her book out for me to sign.

Oh, and I was chatting with the news anchor extra who rudely interrogates Joe in the movie and I discovered that he really IS a news anchor in real life whose station is allowing him to take the time to have a part in this movie. He’s a good-looking guy with a nice sense of humor about the part he’s playing.

Sarah and Tom had a scene in a corn field that involved several takes and camera angles. I was struck once again at just how much sheer physical and emotional endurance their work takes.They stood, in the hot sun, for take after take, patiently repeating their lines. Putting emotion behind each line, time-after-time.

Sarah and I were talking later about costumes, and how much she starts to dislike each one, no matter how much she loved it at first, after wearing it day-after-day for filming. I told her that in a way, I understood how she felt. After working and reworking a manuscript there comes a moment when I’m so sick of it, I just want to burn it.

It strikes me how easy it is to underestimate other people’s work. The only thing I’ve ever seen from actors is the final product. Now, I have a very small inkling of what it takes. It’s amazing how many hours of excruciating and repetitive filming it takes for just a few seconds of cinema.

Tomorrow we set the Sugarhaus Inn on “fire.” I can’t wait.