The Ransom of Little Red Chief

(I wrote the following in my journal August 30, 2008, after spending an afternoon with my five-year-old grandson, Johnathan.) 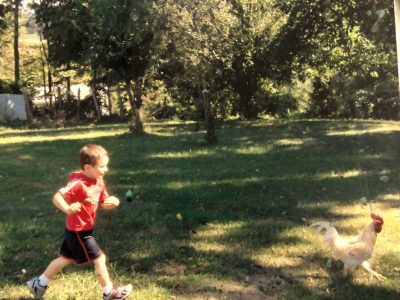 My daughter-in-law dropped my grandson off for a visit today. Five-year-old Johnathan was in full Native American mode with a headband and a brand new plastic bow-and-arrow with three rubber-tipped arrows stuck into the band of his shorts. Needless to say, he wanted to shoot something!

At the moment, we’re house-sitting my mother’s 1800’s log home. There are lovely, antique pieces of crockery displayed, none of which are built to withstand the enthusiasm of an energetic little boy.

So I decided it was time to take Johnathan hunting. Outdoors.

Even though Johnathan is as brown as a nut from being outside all summer, I felt he needed war-paint, and he concurred. Before going on our hunt, we raided my lipstick stash and I painted stripes on his cheeks. That necessitated several minutes of preening in front of the bathroom mirror before he left for the hunt. There’s a lot to admire when you’re five.

We talked about how he was a great warrior named Red Chief, who had to find food to feed the hungry people of his tribe. We also talked about the fact that he was such a big boy now, he would get to go to Kindergarten tomorrow.

I had intentions of pretend-shooting a couple of pretend deer to take back to our tribe (there’s a herd of beef cattle nearby.) But the wise steers had evidently anticipated the visit of Red Chief and were nowhere to be seen. So we made do with target-practice against the metal door of a friendly church that provided a satisfying landing place for the three suction-cupped tipped arrows.

We both got into trouble when we got home and found his mother waiting. Johnathan had an evaluation meeting with his soon-to-be teacher that I’d forgotten about, and lipstick is not easily removed. After much rubbing with a wet wash cloth, he skipped away to meet his teacher for the first time. His mother said she was going to explain his reddened cheeks by informing the teacher that he’d been playing Indians with his grandmother.

I’ve been accused of worse.

I adore my grandson. I hope his Kindergarten teacher will look past his skinny little arms and legs, his huge grin, his sudden bursts of talking, and his inability to sit still–not to mention his sometimes-too-late realization that he needs to go potty–and see the full potential of his warrior’s heart.

And I hope that when he’s a man, he smiles when he remembers having worn his grandmother’s lipstick as war paint.

Now, the rest of the story, thirteen years later! 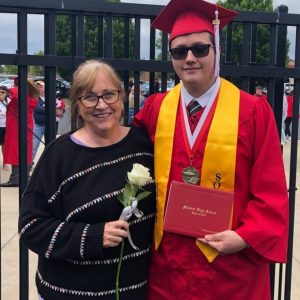 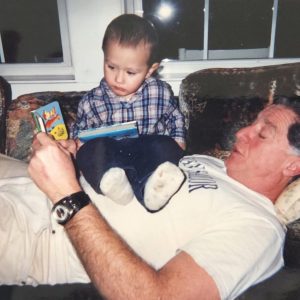 This Sunday I got to watch Johnathan graduate from high school with honors. By the grace of God, he was blessed with good and understanding teachers from the very beginning—including his wonderful Kindergarten teacher. He grew out of his little-boy bow and arrow phase all too soon, but he received a scholarship to Stevens Technical Institute in Hoboken, N.J. where he’ll attend in the fall. Hoboken is a long, long way from our home here in southern Ohio, but you know what? I’m pretty sure he’ll be just fine. (While digging through old family photos of Johnathan to display at his recent graduation party, I came across a favorite photo of mine. Steve, after a hard day, taking time to enjoy reading to his grandson.)