I have a subscription to a very unique newspaper.

The Budget, published in Sugarcreek, Ohio since the 1890’s, consists mainly of hundreds of letters sent in by “scribes” from various Amish and Mennonite church settlements from around the world.

Reading these letters from the Plain people is always interesting and sometimes rather comforting. These scribes usually write about things like quilting frolics, or weddings, or how well their gardens are growing. Sometimes they’ll tell about sweet little happenings—like the letter about the five-year-old visitor last month who asked to watch the Amish farmer’s pigs eat. When the farmer’s wife asked why, the little girl said because she’d heard grownups talk about someone eating like a pig, and she wanted to see what that looked like!

In addition to all the letters, I sometimes get a kick out of reading the advertisements. In general, they are not like the advertisements one usually sees in non-Amish newspapers. This one in particular caught my eye: 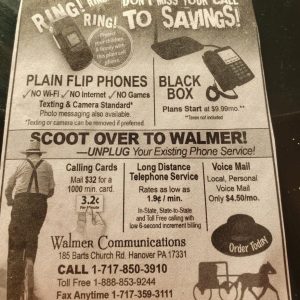 This gentleman is making a living by offering flip phones with NO wi-fi, NO internet, NO Games. There is also an offer to disconnect camera and texting capabilities!

For those who might not know, in the past, most Amish churches did not allow telephones in their homes, but most did allow an outdoor telephone booth. The first time I went to Ohio Amish country, I was surprised to see all these little sheds at the end of Amish people’s driveways. They looked like old-fashioned outhouses to me, so my first thought was that the Amish were being awfully hospitable in providing handy toilets for passersby!

It didn’t take long to discover that wasn’t the intended use. When I saw an Amish man wave at me while seated in one with the door open, I was a bit shocked until I saw that he was completely dressed and holding a telephone receiver to his ear.

However, a few years later, as I was interviewing Amish parents and grandparents for my book, More Than Happy: The Wisdom of Amish Parenting, I asked each person what they believed to be the greatest threat to their culture. Every person, without hesitation, said, “The picture phone!”  (The Smartphone)

“Our people, if they have access to the picture phone, have access to every kind of evil!” was the lament of one Amish minister. He was quite blunt about his fears that his son (who was eighteen-years-old and had not yet joined the church) faced in being able to access pornography on his internet-connected cell phone.

In trying to deal with this threat to their culture, many church leaders minimize the potential damage by making certain a cell phone is only a phone and absolutely nothing more. The gentleman who placed this ad has apparently figured out a way to help the Amish church, while also making a living.

I hope he succeeds.