Sometimes, while researching, I stumble upon the most interesting books.
We Band of Angels: The Untold Story of the American Women Trapped on Bataan by Elizabeth M. Norman is an award-winning book about nurses, written by a nurse.
Here’s the story: After Bataan and Corregidor fell, the Amy/Navy nurses stationed in the Philippines were herded into internment camps. There, they endured three years of fear, brutality and starvation. They were young, single women, used to flirting and dancing, suddenly thrown into a horrifying situation.
By the end of their internment, they hated their military supervisor—an older woman who understood the value of routine. She bullied them into continuing their shift work as nurses despite starvation, illness, no medical supplies, and general hopelessness.
Day after day, she insisted they dress in whatever semblance of nursing uniform they could muster and do their rounds. Toward the end of the war, they often had nothing to give their patients except compassion. Frequently, they were as sick as the people they were trying to help.
Against all logic (others in the camp were dying in droves) when finally liberated, every last one of them survived.
After the war, they credited their nursing supervisor for literally saving their lives with her insistence on routines—no matter how pitifully inadequate their resources. She had forced them to awaken each morning with a modicum of purpose—if only to make their rounds to visit the sick.

This really resonated with me because, after the shock of being told that my husband had terminal bone cancer, I called a friend who was a physician. My question was brief and to the point: “How do I get through this?” The answer he gave was both practical and powerful.

He said, “The families I’ve watched best get through crisis are those who establish routines.”
I asked, “Like what?”
He said, “Take a walk every day—even if it’s short. Carve out time for prayer, even if it’s just five minutes. Establish times for regular meals, because in times like this it’s so easy to forget to eat. Bathe and get completely dressed every day, even though you won’t feel like it. Routines create a comforting sense of structure that will help you and the rest of the family survive.”
The routine I established was far from perfect, but it made a difference.
It is not my nature to have routines. I’m a seat-of-the-pants writer, and a seat-of-the-pants person, but I fell back on this advice again during the worst of Covid-19 and it definitely helped my health and my sanity.

I think the magic of routines is that they can give one a feeling of control in a world that is out of control. And apparently, based on the experiences of the “Angels of Bataan” it can even save one’s life.

My present favorite routine is naptime with my granddaughter, Addy! 🙂 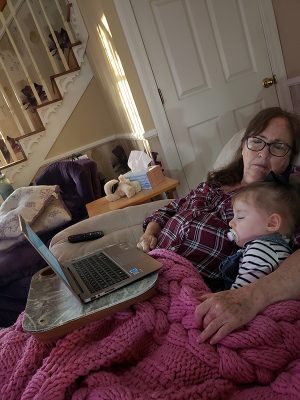